East of the Sea of Galilee, a long plateau rises above the surrounding basins. For thousands of years, the Golan Heights in Israel has remained the envy of its environs—even to today.

(Photo: Gamla. Courtesy of the Pictorial Library of Bible Lands)

Those who drive along the eastern side of the Sea of Galilee and its ridge on the Golan seldom see 3 sites with odd names and curious histories.

Here’s a hint at their names:

The site has many hiking trails and picturesque cliffs, affording visitors views of the largest colony of Griffon vultures in Israel. This video shows the vultures as well as other animals in the nature reserve. 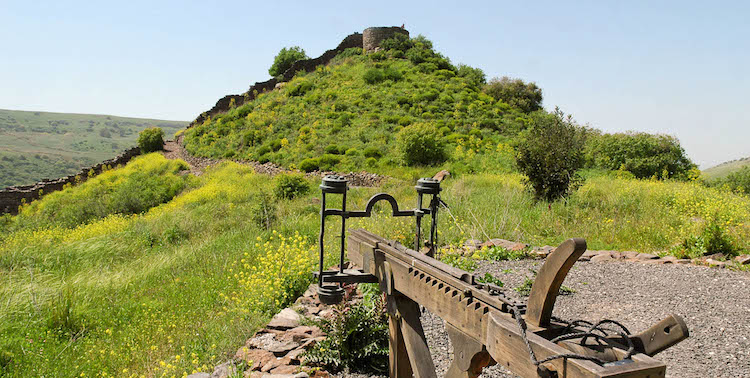 (Photo: Gamla with a reconstructed Roman catapult. Courtesy of the Pictorial Library of Bible Lands)

Gamla would have been one of the “surrounding villages” to which the crowds would have had to go in order to find food, had Jesus not provided through the miracle of the fish and loaves (Luke 9:10-12).

On the way to the Gamla Waterfall (Israel’s highest at 164 feet), you can see one of the Golan Heights’ many dolmens—large, aboveground burial chambers that predate Abraham. 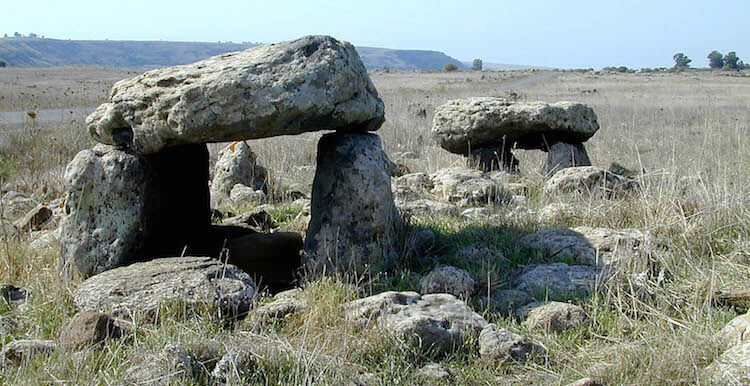 (Photo: Dolmen near Gamla. Courtesy of the Pictorial Library of Bible Lands)

Across the highway from Gamla, this mysterious site dates no earlier than 1500-1200 BC. Rogem Hiri also bears the Arabic name, Rujm al-Hiri, meaning, “stone heap of the wild cat.” 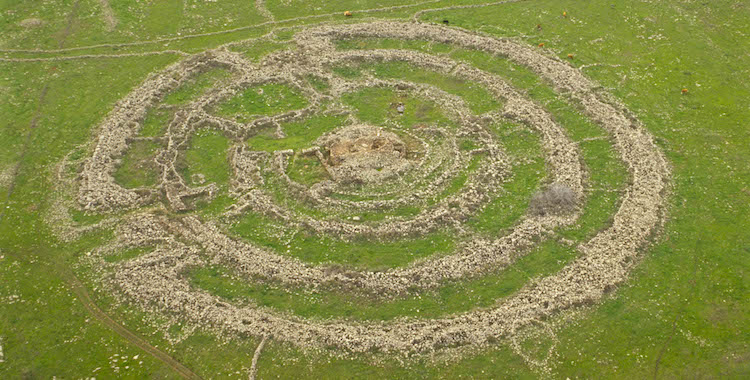 Looking like a stage set from some science-fiction film, these ancient heaps of stones of Rogem Hiri form four massive concentric circles around a central cairn; the diameter of the largest circle measures 490 feet.

Some have suggested this mysterious arrangement of stones—whose exact purpose remains dubious—is the tomb of the giant King Og of Bashan (Deuteronomy 3:11).

The two-and-a-half acre Tel Hadar rests between En Gev and Bethsaida (et-Tell) by the Sea of Galilee and may have served as a regional port for Tel Chinnereth.

(Photo: Tel Hadar beside the Sea of Galilee. Courtesy of the Pictorial Library of Bible Lands)

If so, grain from ancient Bashan in the Golan would have made its way through Tel Hadar’s port before its destination at the Mediterranean Sea.

Wandering among Tel Hadar’s basalt remnants—typical of ruins in the Golan Heights—reveals excavations from the Late Bronze I and Iron Age I-II periods, dating from the 15th– to the 8th-centuries BC. Ruins at the site include two tripartite-pillared buildings (common among Israel’s tells), two storehouses, and a grain silo. 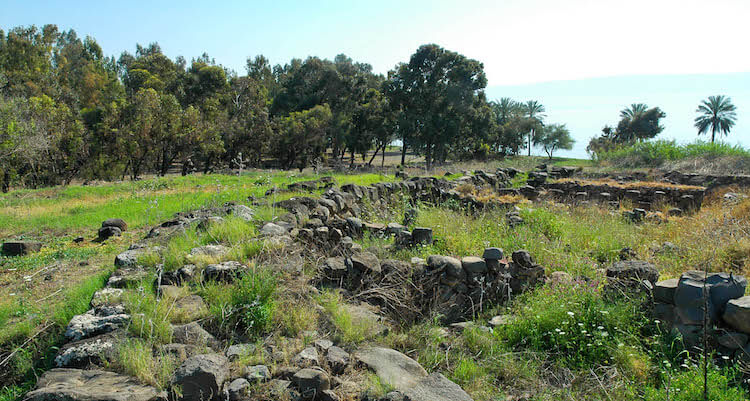 Tell me what you think: What’s your favorite site on the east side of the Sea of Galilee? To leave a comment, just click here.

On the Map: Gamla, Rogem Hiri, and Tel Hadar