Capernaum—Jesus Relocated Here (And the Amazing Reason Why)

The Lord's Simple Strategy Is One You Can Apply Today.

When Jesus changed hometowns, He modeled wisdom. After the Lord left His former hometown of Nazareth, He moved His base of operations to Capernaum, beside the Sea of Galilee.

(Photo: The Synagogue in Capernaum, courtesy of the Pictorial Library of Bible Lands)

This move fulfilled what the Prophet Isaiah had predicted centuries earlier (Isaiah 9:1-2; Matthew 4:14). Today, millions of tourists visit Israel each year, the majority of them Christians. I think it’s ironic that so many people still come to Capernaum and its surrounding area for the same reason they did in the first century.

Because that’s where Jesus was.

His move also models how we should think strategically about our lives.

A stroll around the site reveals numerous archaeological treasures.

Unquestionably, one of the greatest finds in Capernaum is the restored ancient synagogue. Although the white marble ruins date later than the first century, they rest on top of the thick, black basalt foundation of the synagogue in the time of Jesus. In fact, a number of historical and biblical events occurred in this synagogue. It’s mind-boggling to walk in the space and imagine the conversations that occurred there, several of which Scripture records (Mark 1:21-27; John 6:35-59).

These things He said in the synagogue as He taught in Capernaum. —John 6:59

The whole structure represents an excellent example of a synagogue’s typical shape.

Immediately outside the synagogue, only a stone’s throw away, a strange looking building hovers like a spaceship over more basalt ruins. This modern structure is a church that stands suspended above the ruins of two other ancient churches from the 4th and 5th centuries. These churches hallowed the ruins of a first-century home. 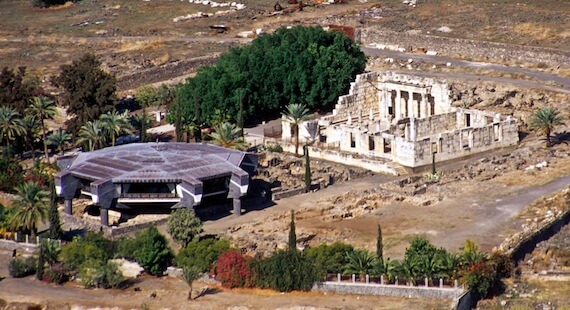 Jesus’ Strategic Move is a Model

Already in existence for two hundred years, Capernaum represented a thriving fishing village in the first century. It served as a convenient stop along the Great Trunk Road or “Via Maris,” the vast International Highway that stretched from Syria in the north to Egypt in the south.

A simple move from Nazareth to Capernaum increased Jesus’ visibility and gave His ministry a more strategic edge.

We need to ask ourselves: Am I thinking strategically about where I live?

Tell me what you think: Have you ever experienced a more effective influence simply by relocating? To leave a comment, just click here.


Capernaum on the Map: