Hanukkah—When Jesus Claimed to Be God on the Temple Mount

On a wintry day in Jerusalem, Jesus walked in Solomon’s Colonnade—the long, covered, columned portico on the east side of the Temple—overlooking the Kidron Valley.

(Photo: Solomon’s Colonnade lay along the eastern wall of the Temple. Courtesy of the Pictorial Library of Bible Lands)

The conversation Jesus had that day occurred at Hanukkah—a celebration the Jews referred to as “the Feast of the Dedication” (John 10:22).

The feast had historical significance, which heightened the passion of those in Jerusalem. They encircled Jesus to ask Him a simple question.

His reply gave them more than they bargained for.

Today, some say Jesus never claimed to be God. But His words during that Hanukkah left little doubt.

Hanukkah—the Feast of the Dedication

The Feast of the Dedication was not a biblical feast commanded by God—but a historical celebration of a victory of yesteryear. 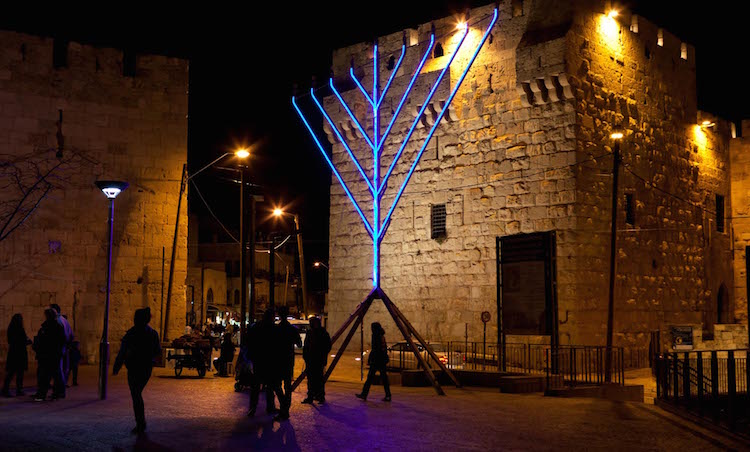 (Photo: Hanukiah at the Jaffa Gate. Courtesy of the Pictorial Library of Bible Lands)

Why does the menorah of Hanukkah—called the hanukiah—have nine branches instead of the seven branches described in Scripture for the tabernacle and temple?

The hanukiah holds an extra candle with which the other eight get lit—one for each day of the eight-day holiday.

As Jesus walked in Solomon’s Colonnade during the Feast of Dedication, the mindset of those in Jerusalem would have remembered the great Maccabean Revolt—Israel’s last great deliverance from Gentile oppression.

(Photo: Model of Temple with Solomon’s Colonnade in background. Courtesy of the Pictorial Library of Bible Lands)

Their question to Jesus would have revealed their desire for the Messiah to deliver them from their present Roman oppressor:

How long will You keep us in suspense? If You are the Christ, tell us plainly. —John 10:24

Jesus responded that He had told them He is the Messiah—in the miraculous works He had done—but they did not believe Him because they were not His sheep. They wanted another Judas Maccabeus.

Instead they got much more.

After affirming the security of the salvation He and the Father provided the sheep, Jesus made this statement:

The word “one” in Greek is neuter—and prohibits a meaning that Jesus claimed He and the Father were the same person. Instead, He meant they were one in purpose and in nature—a clear implication of deity. The rest of the New Testament—as well as the church’s creeds—affirm this essential belief (John 1:1; 20:28; Phil. 2:6; Col. 2:9).

Those listening clearly understood His claim and picked up stones to stone Him. When Jesus asked why they intended to kill Him, they replied:

Only a few months later, Jesus would return to Jerusalem to lay down His life for His sheep—and rise again.

How appropriate that we celebrate the birth of Jesus—the incarnation when God became Man—in the same season Jesus claimed to be God.

Tell me what you think: Do you believe Jesus is God—and if so, why? To leave a comment, just click here.