Life is full of moments that expose our doubts. In spite of all the Scripture we’ve learned and all the past victories the Lord has given us, occasionally something will happen that causes serious doubt.

Maybe it’s a financial situation that undercuts future security. Or it might be a miserable marriage. Perhaps it’s a pastor or a leader who has failed. Maybe it’s our own failure.

Whatever the reason, seasons of doubts and confusion can come even to the most committed followers of Jesus:

I confess, I’ve had my doubts as well. Sometimes circumstances literally demanded I doubt God. A simple walk in Jerusalem one evening gave me an essential reminder.

I’m convinced it can help you.

The Mountains around Jerusalem Don’t Move

Walking back to my hotel at sunset, my eyes caught a final glimpse of the sun as it sank over the ridge west of the city. I stopped to watch, and these words hit me unexpectedly:

As the mountains surround Jerusalem, so the Lord surrounds His people from this time forth and forever. —Psalm 125:2

I had learned the Psalm years earlier, but witnessing this image all around me secured the truth of the text as nothing else could.

(Photo: The Temple Mount at sunset. Courtesy of the Pictorial Library of Bible Lands)

Mountains do surround Jerusalem . . . the Lord does surround His people.

Those mountains have stood through countless wars, storms, and the seasons of the saints who walked upon them. The hills haven’t moved.

God’s Presence with You Hasn’t Changed

God has given His promises along with this physical illustration that we can come to again and again for assurance. His presence and protection are like immovable mountains. Several times a year, Hebrew pilgrims would ascend these same mountains, singing the Psalms of Ascents. And so, dozens of times during their lifetime, these believers would travel to the hills that repeatedly illustrated their own assurance and security before God.

“Those who trust in the Lord are as Mount Zion,” they would sing over and over, “which cannot be moved but abides forever” (Psalm 125:1). 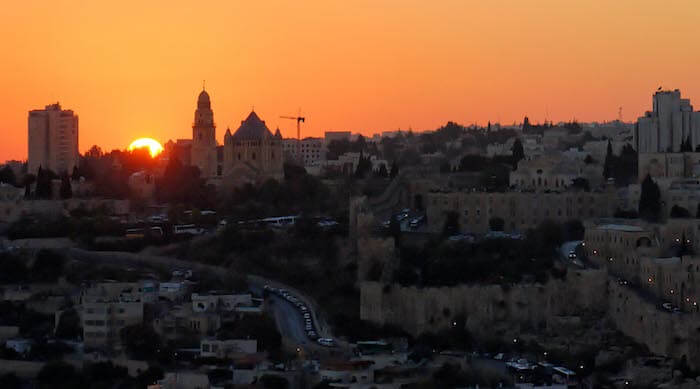 (Photo: Sunset over Jerusalem. Courtesy of the Pictorial Library of Bible Lands)

The mountains around Jerusalem are still there. I’ve seen them. They serve as a visual reminder of the spiritual truth.

Regardless of how you feel or what you see, in spite of the impossible odds against you, God has not abandoned you.

His plan is simply much, much larger than what you can imagine.

Tell me what you think: What doubts have you struggled with? To leave a comment, just click here.