I love the places of the Passion Week in Jerusalem! We saw some of them yesterday and today.

The Dominus Flevit Church on the Mount of Olives, marks the place where Jesus wept over Jerusalem at His Triumphal Entry (Dominus Flevit is Latin for “the Lord wept.”)

The sprawling panorama atop the Mount of Olives is where Jesus gave His “Olivet Discourse,” outlining the prophetic events surrounding Jerusalem’s future (Matt. 24:3). 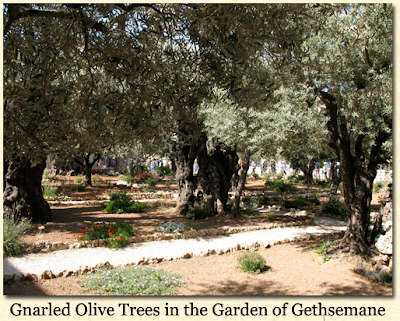 The Garden of Gethsemane at the bottom of the same hill, where Jesus wept in anguish, surrendering His will as He cried out to the Father. It’s ironic that on the same hill where the disciples hailed Jesus as Messiah at His Triumphal Entry, only a few days later they would abandon Him at His arrest. So fickle! (And so much like us.) Interesting also that Jesus wept on both occasions.

The Church of All Nations covers the traditional spot where Jesus prayed in agony on the night He was betrayed. At the front of the church, four groupings of columns support a massive mosaic that crowns the facade. It depicts Christ gazing up in prayer to the Father who holds the alpha and omega letters. Angels hover near Jesus, and the disciples bow to His left and right.

Inside the church a large altar against the center of the back wall overshadows a bare outcropping of rock on the floor. This is the spot where it is believed Jesus bowed in prayer. Person after person approached, knelt and kissed the rock blackened by decades of lips pressed in the same spot. 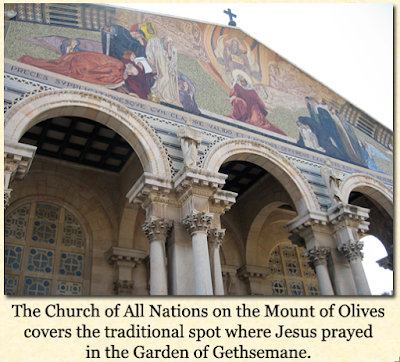 I always find it difficult to believe sincerity in the hearts of the worshipers simply because I don’t share their tradition. When I see Jews kissing a mezuzah (a case with a scroll of Scripture inside of it) on their doorposts, I think of them as devoted. But when I see Christians kissing rocks, it bothers me. I guess the inconsistency of my reasoning reveals my own hypocrisy. For all I know, they love the Lord Jesus far more than I do.

The eerie Church of the Holy Sepulcher represents the location of Jesus’ death, burial, and resurrection. (Check out the fascinating 360-degree views of the church here.)

How marvelous to be in Jerusalem during the same time of year as Jesus was during the Passion Week (give or take a couple of weeks). This year, Palm Sunday is March 28, Passover begins on March 30, and Easter Sunday is April 3. (Historically, Jesus died on April 3, AD 33, and rose from the dead on April 5.)

Tomorrow . . . we take a day trip to the blistering shores of the Dead Sea and tour Masada, Qumran, and Engedi.