Not many people can say they grew up on a hill that overlooked the battlefields of history. But Jesus could.

Jesus’ hometown sat off the beaten path and high on a ridge that overlooked the International Highway and the prominent Jezreel Valley.

(Photo: Nazareth Mount of Precipitation. Courtesy of the Pictorial Library of Bible Lands)

The gospels tell us Nazareth rested on a hill with a formidable precipice (Luke 4:29). From here Jesus cold see the battles of Israel’s history.

The city’s name likely comes from the Hebrew term netzer, meaning “branch” or “shoot.” Some scholars believe this represents the faith of those Jews who returned from exile. Their hope focused on the coming Messiah, the “righteous Branch” of David, promised by the prophet Jeremiah (Jeremiah 23:5; 33:15).

But when He did finally show up, they tried to throw Him over the cliff.

The modern city has swallowed the ancient one. Ancient ruins are virtually non-existent. I shot this video from a helicopter over Nazareth. It begins over the Nazareth Ridge and ends over the Church of the Annunciation.

The Church of the Annunciation, completed in 1969, replaced the earlier Franciscan church of 1730. The Franciscans had built over the ruins of a 12th-century Crusader church and a 5th-century Byzantine church.

(Photo: Nazareth Church of Annunciation. Courtesy of the Pictorial Library of Bible Lands)

The modern structure represents the largest church building in the Middle East and remains the focal point of Nazareth’s tourism. Why so significant? Inside, the Cave of the Annunciation marks the traditional location where the angel Gabriel announced to Mary that she would give birth to the Messiah (Luke 1:26-38).

For the adventurous visitor, a 40-mile trail now stretches from Nazareth to Capernaum. Called the “Jesus Trail,” the path allows visitors to walk the path that represented one Jesus’ most significant geographical transitions.

A new tourist site called Nazareth Village offers visitors a glimpse into what first-century Nazareth may have looked like in Jesus’ day. It’s a great place to take pictures.

When Jesus returned to His hometown of Nazareth, He found a warm welcome at the synagogue—that is, until He preached. The young carpenter claimed to have fulfilled the messianic prophecy He had just read from Isaiah 61:1–2 (Luke 4:16-30). The hearers took offense that the local-yokel Jesus would dare to be remarkable. After all, wasn’t He the guy who built their dining tables?

The townspeople were so enraged that they took Jesus to the edge of the Nazareth Ridge and wanted to fling Him off into the Jezreel Valley. But He passed through their midst and departed. You think that made for awkward subsequent holiday gatherings? 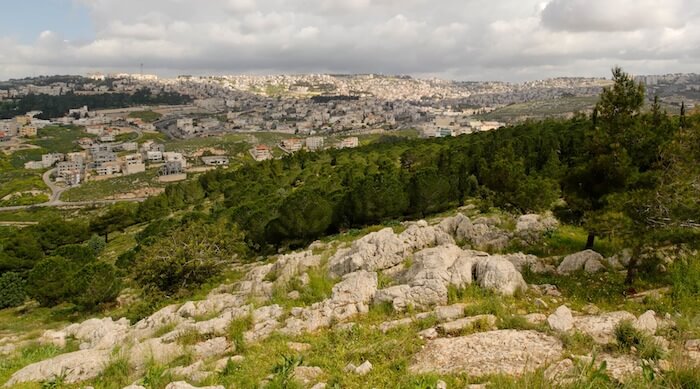 (Photo: Nazareth as seen from the Nazareth Ridge. Courtesy of the Pictorial Library of Bible Lands)

In their attempts to discredit Jesus, the Pharisees claimed, “no prophet arises out of Galilee” (John 7:52). But the prophet Jonah came from Gath-hepher, located right beside Jesus’ hometown of Nazareth (2 Kings 14:25).

Nazareth—A View to the Past and the Future

The Nazareth Ridge, near what is called “Mount Precipice,” offers beautiful overlook on the ridge that encircles Nazareth, and it provides a view for many miles in three directions.

Like any other boy growing up in Nazareth, Jesus would have known the ins and outs of the hills that surrounded His village. Of course, He would have seen the view from this ridge many times. On the valley floor below, caravans of travelers and the war machines of history had passed.

From this one location, many battles have marked the pages of Scripture.

Squinting southwest through the haze, a visitor can spy Tel Megiddo in the distance—the site of many battles past. But it also will serve as the place of gathering for the future battle of Armageddon (Revelation 16:16).

As Jesus stood there, it’s easy to imagine that He would have envisioned all the history that stretched out before Him—and the future battle He will wage as a Victor.

How could He not have envisioned it?