I remember in the 2008 election when Barack Obama conducted his world tour as part of his presidential campaign, he visited the Western Wall in Jerusalem. You may remember that he inserted a prayer in the wall. The Jews consider this a sacred act—even if the individual represents another faith. 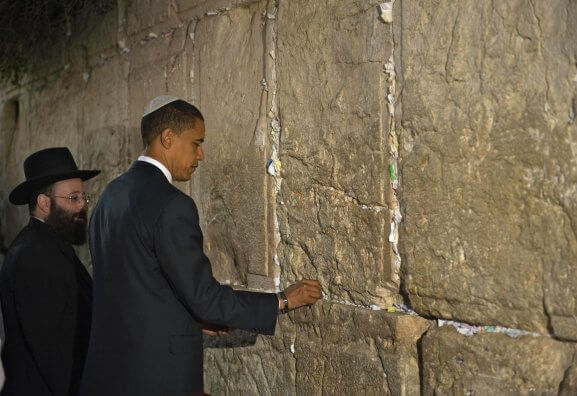 After Obama left the Western Wall Plaza, someone scrabbled out the prayer—written on King David Hotel stationary—and took a picture of it.

Lord—Protect my family and me. Forgive me my sins, and help me guard against pride and despair. Give me the wisdom to do what is right and just. And make me an instrument of your will. —Barack Obama

Prayer for Our Leaders

I join with millions of Christians by saying “Amen” to Obama’s prayer—in the name of the only One who can forgive his sins, grant him humility and hope, and give him wisdom to lead—Jesus Christ.

The Bible and the United States of America

I think of the Prophet Samuel’s words to his people after they demanded the enthronement of King Saul:

Moreover, as for me, far be it from me that I should sin against the LORD by ceasing to pray for you . . . Only fear the LORD and serve Him in truth with all your heart; for consider what great things He has done for you. —1 Samuel 12:23–24

My prayer is not only for Obama, but for my great country of the United States of America.

For, although we are not Israel—and the Lord has made no covenant with us—we still have God’s timeless promise He made to ANY nation:

Tell me what you think: Can you genuinely pray for someone whose political and moral ideologies you don’t agree with? To leave a comment, just click here.