What I Saw in the Brazen Face of Pharaoh’s Mummy

Seeing the Faces of Ancient Egypt in the Cairo Museum 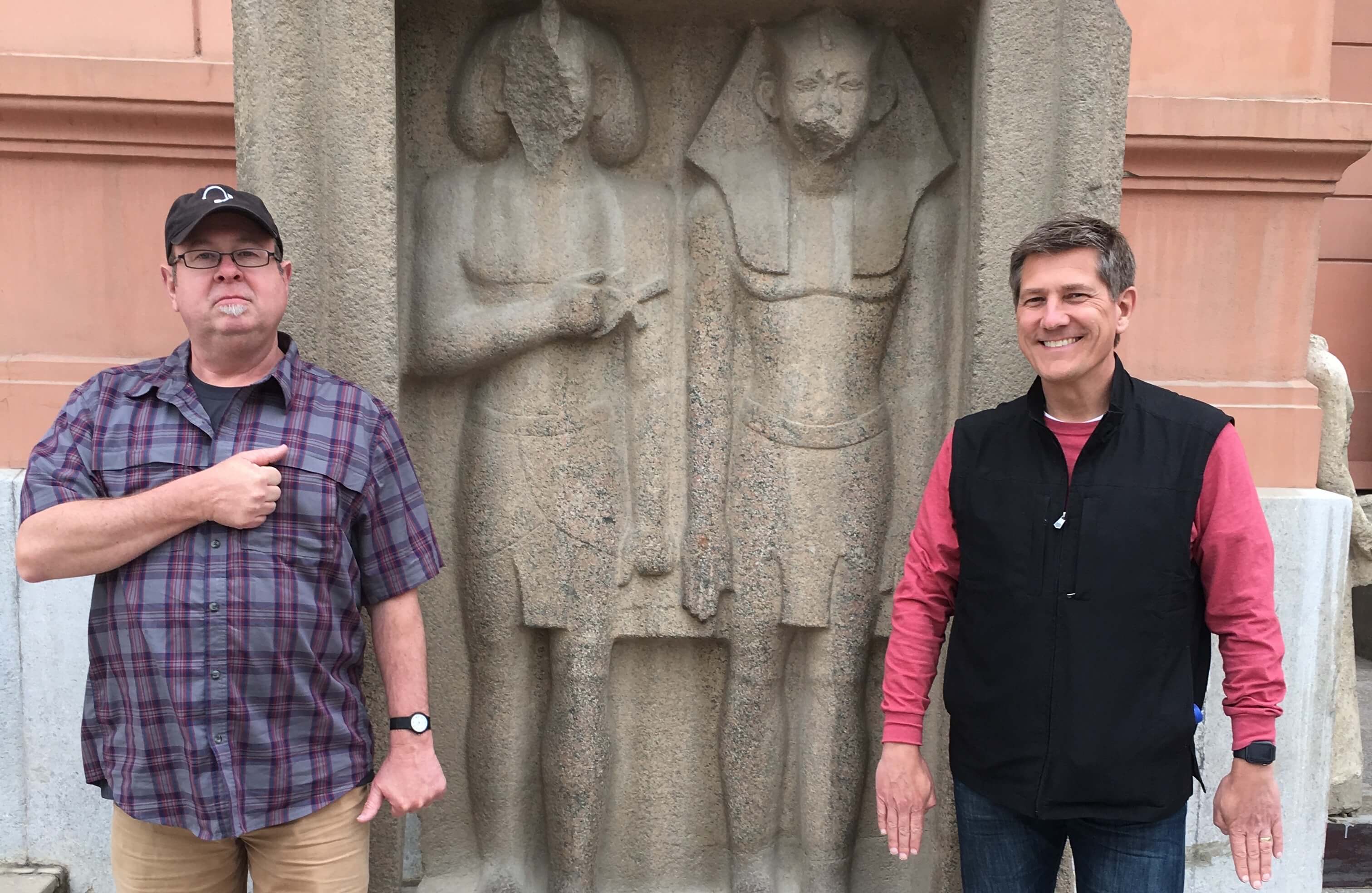 I saw many amazing sites and new faces on my recent trip to Egypt. But none were as moving as when I looked into the mummified faces of the pharaohs who looked into the face of Moses. The Cairo Museum offered such a look. 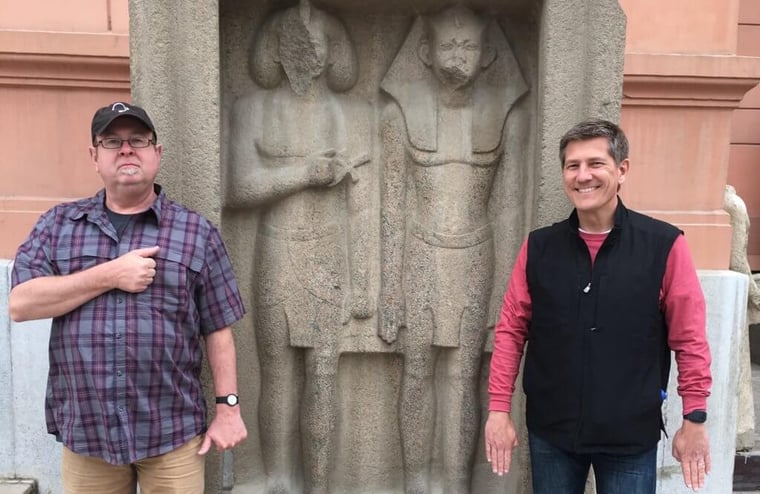 (Photo: At the Cairo Museum with my cameraman, Scott Wilson)

The Royal Mummies Hall in the Cairo Museum contains glass cases with ten mummies of pharaohs from the New Kingdom. Such kings include Ramses I, Seti I, Ramses the Great, Merneptah, and others.

But three other mummies were the reason I went. These three pharaohs the Bible refers to in connection with the Book of Exodus—and the life of Moses.

The Bible Gives us the Date of the Exodus

Although many historians (and Hollywood) date the Exodus to the 13th-century BC, the Bible allows no wiggle room and offers a very specific date:

Now it came about in the four hundred and eightieth year after the sons of Israel came out of the land of Egypt, in the fourth year of Solomon’s reign over Israel, in the month of Ziv which is the second month, that he began to build the house of the LORD. —1 Kings 6:1

With that date in mind, we know that these three pharaohs in Royal Mummies Hall had a direct connection to Moses.

Hatshepsut, one of the only female Pharaohs in Egyptian history, grew up as daughter of Pharaoh Thutmose I (1526-1512 BC). As such, she likely was the daughter who found Moses in the Nile and who took him to be her own son in her house (Exodus 2:5-10; Acts 7:21).

As I stared at the mummy of Hatshepsut, I looked carefully at her exposed hands and head. Those hands held baby Moses! Those lips kissed him, and Moses would also have expressed affection to this woman for years.

(Photo: Temple of Hatshepsut. Courtesy of the Pictorial Library of Bible Lands)

Hatshepsut co-reigned with her stepson Thutmose III, but after she died, he did all he could to remove her memory from the monuments and etchings of Egypt’s history. Thutmose also tried to kill Moses after Moses killed the Egyptian who beat a Hebrew (Exodus 2:15). Moses and Thutmose III likely grew up together as contemporaries.

As I gazed at Thutmose III’s mummy, I considered how he used his powerful military force to secure the International Highway in Canaan. His famous campaign and victory over Megiddo offers a great lesson on the strategic value of the site. Thutmose chiseled his success in the walls of the Karnak Temple in Luxor (which I also saw).

Isaiah used this highway as an illustration of a day in the future when the travelers on this road from Egypt wouldn’t have war on their minds, but worship (Isaiah 19:21-23).

This mummy got most of my attention, because Amenhotep II was the pharaoh of the 1446 BC Exodus! As is true with much of Egypt, photography (especially videography) is forbidden. But the image of this pharaoh burned itself in my brain. 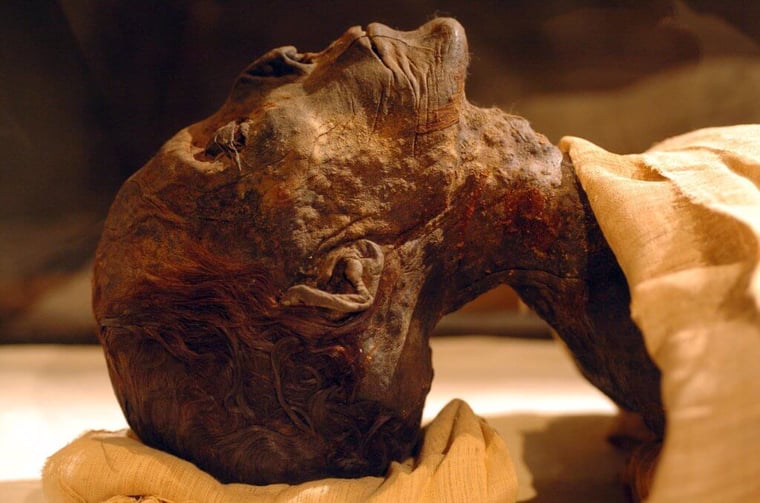 I stood and stared into the face of Amenhotep II, the pharaoh who stood toe-to-toe with Moses. This is the ruler who shouted at Moses, the king who hardened his heart against God and who refused to allow the Lord’s people to go.

I stared in Pharaoh’s brazen face and saw a person who refused to obey a God who graciously made Himself known to him. Over many days and in various ways Pharaoh had the opportunity to change.

I’ve been to the lands of the Bible many times, and I’ve seen many places our biblical heroes have seen. But this was the first time I saw people that our biblical greats had seen! Moses, Aaron, Miriam, Joshua, Caleb all would have seen these three pharaohs.

It felt like standing in a bizarre time machine. But a museum official brought me back to reality. “Keep moving!” he yelled and motioned me to move so the line of visitors behind me could also gawp at the mummies.

As I left, I thought about how in the future kingdom of God, when Jesus Christ rules the earth from Israel, all nations will gather to worship Him. Isaiah writes that Egypt will learn the Hebrew language, set up monuments to the Lord, and receive His blessings.

Blessed is Egypt My people, and Assyria the work of My hands, and Israel My inheritance. —Isaiah 19:25

Honestly, looking at the predominantly Muslim nation of Egypt today, Isaiah’s prophecy seems an absolute marvel—just as it must have seemed to God’s people in Isaiah’s time.

But it will happen! I look forward to it.

Tell me what you think: What runs through your mind as you look at Pharaoh’s mummy? To leave a comment, just click here.