The Valley of Elah—How Your Ordinary Becomes Extraordinary

God will make your simple faithfulness great in His time.

At first glance, the valley seems like nothing remarkable. Just a road winding its way up into the Hill Country of Judea. A large satellite dish sits on one hill. A dry stream bed divides patches of tall weeds. Greenhouses clump together next to wheat fields.

(Photo: The Elah Valley. Courtesy of the Pictorial Library of Bible Lands)

Like the other valleys in Israel’s Judean foothills today, the Valley of Elah appears so commonplace. Very ordinary.

But back up 3000 years and the Valley of Elah offers one of the most strategic battlefields in Israel.

It was here David killed Goliath.

That day speaks significance to the days of your life that feel ordinary.

With the Hebrews dominating the Hill Country of Judea and the Philistines controlling the coastal plain, the buffer between these enemies was the Shephelah—often rendered “foothills” or “lowland” (Zechariah 7:7; 2 Chronicles 26:10).

Five valleys cut in an east-west direction through the Shephelah and offered convenient passages from the Philistine Plain to the Hill Country of Judea. So convenient, in fact, they had to be guarded vigilantly.

The Valley of Elah was one of them. That’s what made David’s battle with Goliath so critical.

Elah is the Hebrew term for the Terebinth Tree, which still grows in the valley.

David and Goliath in the Valley of Elah

Having lost control of the Hill Country farther north, the Philistines tried to come up the Valley of Elah to gain access once again (1 Samuel 14; 17). The valley offered a backdoor entrance to the Hill Country via Bethlehem. They had to be stopped.

Dr. Todd Bolen comments on his photo above:

This panoramic view of the Elah Valley from the south is an approximate view of what the Philistine army saw as they faced the Israelites in the battle commonly known as “David vs. Goliath.”  The Philistines were encamped on the south side of the valley and King Saul’s forces occupied the hill on the northern side.

How ironic that the two men who faced each other in the middle ground came from two towns at either end of it. The valley begins just east of Gath and ends near Bethlehem.

A small bridge spans the brook in the Valley of Elah today. The dry stream bed has rocks scattered here and there.

Some assume David selected five stones from the stream that snaked through the valley so that he could take down Goliath and his four brothers. Probably not. 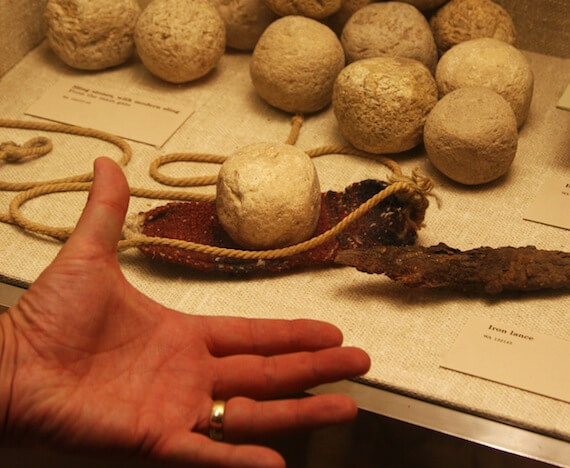 (Photo: My hand beside sling stones from Lachish. British Museum)

David came to the Valley of Elah that day from Bethlehem, a mere twelve miles away. But he didn’t come to be a national hero.

How Your Ordinary Becomes Extraordinary

David lived many thousands of days that never made it to the pages of Scripture. That’s true of all of our days. But ours are no less significant. God often uses ordinary days in extraordinary ways.

But don’t live for that extraordinary day. Just stay faithful.

God will use your faithfulness on ordinary days in extraordinary ways—in His time. Wayne Stiles

The Lord isn’t calling you to do anything extraordinary today. Just stay faithful to the ordinary tasks He has called you to do.

He will make your simple faithfulness great in His time (1 Peter 5:6).

Increase Your Faithfulness: Connect the Holy Land to Your Faith

See how your life and the Holy Land relate with this FREE webinar:

Tell me what you think: What helps you see the significance in your ordinary days? To leave a comment, just click here.