The Sounds of Music—and a Funny Conversation

“Are you the mother?” a strange man asked my wife after approaching our family.

Cathy looked at our two daughters and replied hesitantly, “Yes.”

“I thought I noticed a resemblance when I saw ya’ll sitting in front of us on the front row!” Then he called his wife and family over to us. “Honey, she’s the mother!”

We had just finished attending a concert where the Plano Symphony Orchestra played “The Sound of Music from Salzburg.” It was outstanding! The concert included pieces by Mozart as well as a special appearance by the “Von Trapp Children Singers”—four 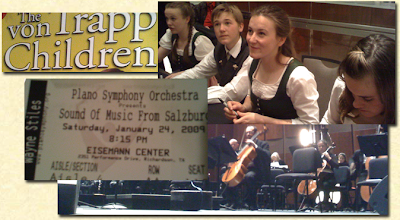 young siblings who descended from one of the Von Trapps.

My family and I love watching our The Sound of Music DVD, so we coughed up the change and bought tickets for seats on the front row. Great seats! That’s where we were sitting when the man behind us noticed us. And then we stood in the lobby, and his exuberant call to his wife brought his whole family toward us with smiles.

“It’s so nice to meet you,” his wife gushed, “we’re the Smiths” (not their real name, of course). By now I thought it was really odd that he didn’t even ask our name, so I offered my hand to the man, adding, “And I’m the father. We’re the Stiles family.”

He smiled back and shook my hand, asking: “And so . . . you’re just touring with them?”

Then it hit me. Oh, good grief!

This man and his family thought Cathy and I were the parents of the Von Trapp children! After we clarified that our only children stood there beside us, we all had a good laugh. Then they sheepishly shuffled into the line to get autographs from the real Von Trapp kids.

“For thirty seconds we were famous!” I told my family as we got in our van to leave.

What a great reminder of the fleeting satisfaction that the pursuit of earthly fame offers. Isn’t it great to live for the glory of God instead of the fame of your own name?

Okay, so here’s a picture of our kids with the Von Trapps. Can YOU tell which is which? 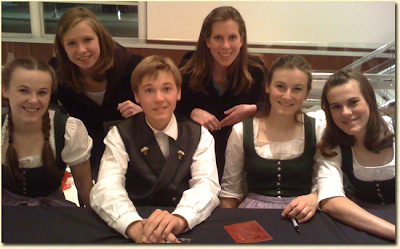