Like the kids, we came on a field trip to explore ancient Shiloh. Although our lunch was hardly a feast, it reminded me of the reasons the young nation of Israel initially came to this site. They came to worship at the annual feasts before the Tabernacle at Shiloh.

(Photo: Area of the Tabernacle at Shiloh. Courtesy of Pictorial Library of Bible Lands)

Ask most Americans where Shiloh is, and you’ll likely get a blank stare.

But question someone who knows his or her Bible, and Shiloh means something far more significant.

Shiloh in the Bible: a Promise & a Person

The patriarch Jacob first spoke of Shiloh on his deathbed, giving a promise to the tribe of Judah:

The scepter shall not depart from Judah, nor the ruler’s staff from between his feet, until Shiloh comes, and to him shall be the obedience of the peoples. —Genesis 49:10

Most commentators agree that Jacob’s prediction had messianic overtones and included a promise of kings as well as a place of rest. Ultimately, the tribe of Judah would produce the Messiah, Jesus (Hebrews 7:14; Revelation 5:5).

After Israel entered the Promised Land, the Tabernacle of Moses indeed did rest from its wanderings. It rested at a place named Shiloh (Joshua 18:1).

Follow the geography of God’s presence throughout history in this post I wrote
about the various places God’s glory rested.

Shiloh is a Place

After finishing lunch, I followed a path to where archaeologists have identified a large, level area. The space measures 400 feet long and 77 feet wide. Although not all agree, this place likely represents the place where the Tabernacle at Shiloh rested.

Examining the ruins, I saw an outline of the Tabernacle’s footprint. I walked to the back where the rocks roughly formed a rectangle. 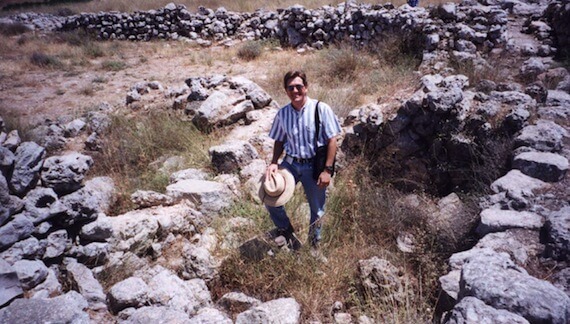 (Photo: Standing where the Holy of Holies was.)

It was hard to take in the truth of it, but if the Tabernacle at Shiloh stood where I was standing, then the Holy of Holies had been beneath my feet. God’s glory — right there!

Why did God destroy Shiloh? Because ancient Israel refused to walk with God,

He abandoned the dwelling place at Shiloh, the tent which He had pitched among men, and gave up His strength to captivity and His glory into the hand of the adversary. —Psalm 78:60-61

Shiloh is a Parable

Centuries later in the days of Jeremiah, the stubborn leaders of Judah had a false sense of security because they had the Temple of God in Jerusalem. So the Lord told Jeremiah to use Shiloh as a parable—or illustration.

Once Israel came to the Tabernacle at Shiloh to worship at the feasts, but today only archaeologists, a few tourists, and schoolchildren visit.

Once the presence of God dwelt at Shiloh, but now only weeds and rocks remain.

“Go to Shiloh and see,” God said. In traveling to Shiloh, God’s people could see what happened when a previous generation did not follow Him.

The people of Jeremiah’s day, as well as those at the time of Jesus, felt that the presence of God’s temple gave them security.

Let us remain faithful to the Lord so that we may remain a vessel through which His glory can shine to a watching world.

Tell me what you think: Where do you see people placing their security, even as Christians? To leave a comment, just click here.

Shiloh on the map:

Want to Explore Shiloh and Other Biblical Places?

Take a virtual journey through the Bible Lands. With Walking the Bible Lands, get to visit places you’ve read about in the Bible. Experience the Bible in a new way and deepen your relationship with God.