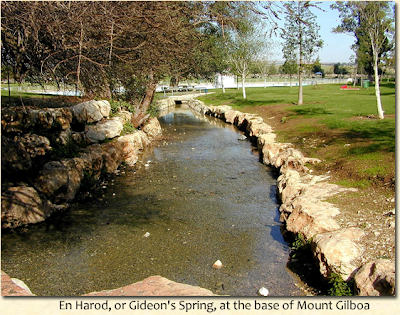 At the base of Mount Gilboa in Israel, a spring still flows today as it has for millennia. Green grass, a swimming pool, and beautiful picnic spots surround the spring that takes its name from the valley that spreads before it.

Ein Harod, or sometimes called, “Gideon’s Spring,” represents the place where Gideon selected his three hundred men to fight the armies of Midian. (I always remember Gideon fought Midian because their names rhyme.)

Years later, a fearful King Saul failed to learn the lesson Gideon had acquired in the same area. On the northern side of the Hill of Moreh, the city of Endor had a resident medium that Saul visited in a frantic attempt for supernatural information. Surprising even the medium, God revealed through the Prophet Samuel that Saul would die the next day (1 Samuel 28).

The army of Israel fought the Philistines on Mount Gilboa, and King Saul and his sons were killed. Their bodies hung in effigy on the walls of nearby Beth-shan until Hebrews from Jabesh-gilead recovered them (1 Samuel 31). 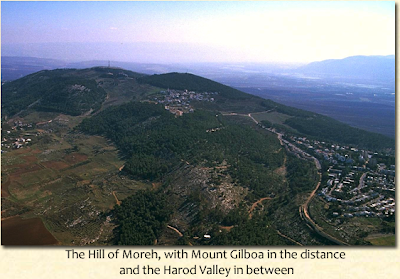 Centuries later, the southern side of the Hill of Moreh saw the Prophet Elisha raise the dead son of a woman from Shunem (2 Kings 4).

In the first century, Jesus raised a widow’s son on the north side of the hill in a town called Nain (Luke 7:11-17). (I keep the location of the sites around the Hill of Moreh straight by remembering a simple alliteration: Nain-north and Shunem-south.)

How interesting that two sets of desperate situations occurred in the same area. For Gideon and Saul, it was tremendous odds in battle at Gilboa. For Elisha and Jesus, it was the death of a mother’s son beside the Hill of Moreh.

In every instance, the lessons pointed to the same principle: God alone provides the necessary strength for overwhelming situations—even in circumstances as crushing as death.

I find it fascinating how the lessons taught in these places offer truths as enduring as the beautiful settings in which they occurred.

Categories: Devotional, Ramblings
Disclosure of Material Connection: Some of the links in the post above may be “affiliate links.” This means if you click on the link and purchase the item, I will receive an affiliate commission. (Thanks!) I only recommend products or services I use personally and believe will add value to my readers. I am disclosing this in accordance with the Federal Trade Commission’s 16 CFR, Part 255: “Guides Concerning the Use of Endorsements and Testimonials in Advertising.”