The ancient world had a bully system that worked in straightforward terms. A nation would conquer a region and demand tribute (annual payment of money and goods). If you didn’t pay tribute, they’d come and kill you. Pretty simple system. 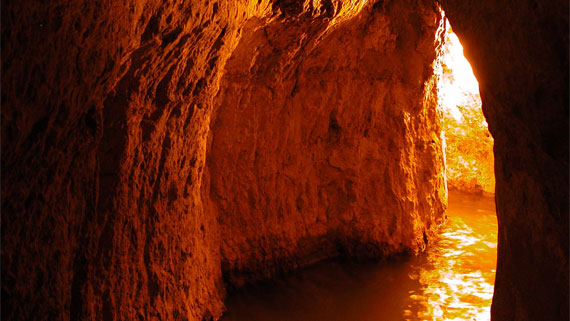 King Hezekiah refused to pay tribute to the bully. So the Assyrians invaded Judah.

Archaeology has unearthed treasures that reveal Hezekiah’s faith in God. How does it strengthen your faith to see the Bible in archaeology?

Hezekiah decided with his officers and his warriors to cut off the supply of water from the springs which were outside the city, and they helped him. So many people assembled and stopped up all the springs and the stream which flowed through the region, saying, ‘Why should the kings of Assyria come and find abundant water?’ . . . It was Hezekiah who stopped the upper outlet of the waters of Gihon and directed them to the west side of the city of David (2 Chronicles 32:3-4, 30). 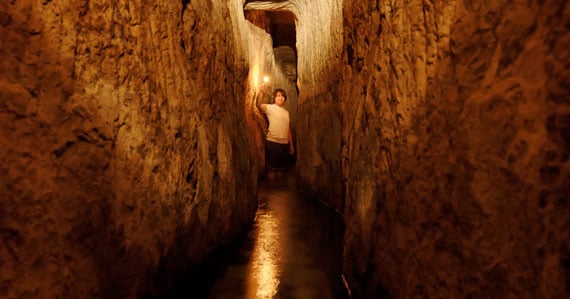 (Photo: Wading through Hezekiah’s Tunnel. Courtesy of the Pictorial Library of Bible Lands)

Today, visitors to Jerusalem can wade through the 1,750-foot-long Hezekiah’s Tunnel, which is still fed by the Gihon Spring. Chiseled beneath the City of David, it's an absolute engineering marvel. (There’s also an option to walk through a “Dry Tunnel” built earlier by the Canaanites.)

How many pieces of archaeology can you interact with so closely? Very few.

The famous “Siloam Inscription,” discovered at the end of the tunnel, described in ancient Hebrew script the process of digging the passageway. The inscription now sits on the top story of the Istanbul Archaeological Museum. 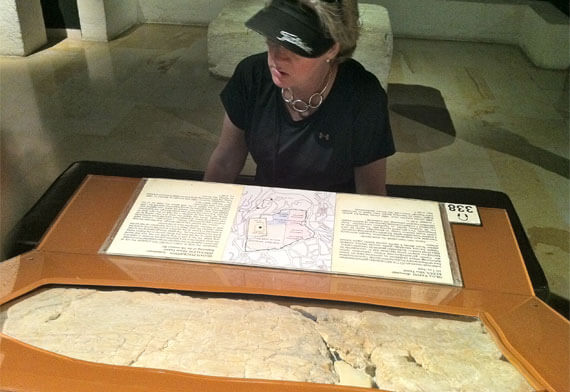 (Photo: The Siloam Inscription in the Archaeological Museum in Istanbul, Turkey)

To protect the large number of refugees who scrambled south after Assyria invaded the northern kingdom twenty years earlier, King Hezekiah built a wall around the western hill of the city of Jerusalem (2 Chronicles 32:5).

A portion of this “broad wall” still stands for all to see in today’s Jewish Quarter.

They had a wall. They had water. They even had weapons. But those preparations were not where they placed their confidence.

Hezekiah prayed with the Prophet Isaiah. (What better prayer partner could you have than the prophet Isaiah?) Hezekiah’s words to his people were wonderful:

Be strong and courageous, do not fear or be dismayed because of the king of Assyria, nor because of all the multitude which is with him; for the one with us is greater than the one with him. With him is only an arm of flesh, but with us is the LORD our God to help us and to fight our battles (2 Chronicles 32:7-8).

And what happened? The Lord sent an angel who wiped out the Assyrian army.

So much for the bully.

The Assyrian records also record this siege. Sennacherib recorded these words on a prism:

As to Hezekiah, the Jew, he did not submit to my yoke. I laid siege to forty-six of his strong cities, walled forts and to the countless small villages in their vicinity and conquered them . . . . Himself I made prisoner in Jerusalem, his royal residence, like a bird in a cage. 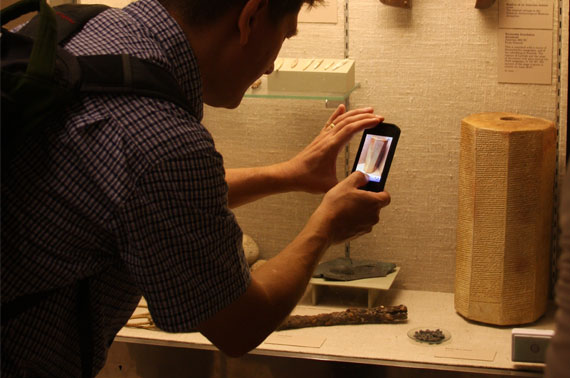 Notice it doesn’t say he conquered Jerusalem! The Assyrian king could only boast that he surrounded it. The part about God obliterating his army, Sennacherib conveniently omitted.

Spin politics isn’t a new thing, is it?

A Lesson from Biblical Archaeology

When I walked through Hezekiah’s tunnel and gazed at the broad wall he built, and when I observed Sennacherib’s prism in the British Museum, or when I tried to read the Siloam Inscription in the Istanbul Archaeological Museum, one lesson continued to rattle in my mind.

I have a faith rooted in history — not mystery. The words on the pages of Scripture are supported by simple elements we can dig out of the ground.

They prove nothing, but they support it all.

With my own eyes, I have seen Hezekiah’s wall, Hezekiah’s Tunnel, Sennacherib’s Prism, and the Siloam Inscription. They are real.

So is my faith.

Tell me what you think: How does it strengthen your faith to see the Bible in archaeology? To leave a comment, just click here.

Hezekiah’s Tunnel on the Map:

You can learn more about Hezekiah’s Tunnel and see it up close without making travel arrangements. Take a journey with a virtual tour of the Bible Lands.