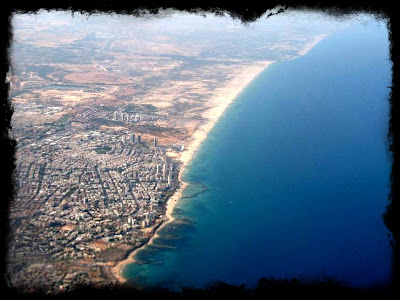 It’s hard to believe just yesterday I was in America.

Today’s transportation system requires little more than a basic understanding of road signs and airline gates (which I somehow still seem to miss). That’s why most of us failed geography. Who needs it?

But in ancient Israel geography was critical. Today I saw one reason why.

Our hotel in Tel Aviv sits right next to ancient Joppa (think Jonah and Peter). In fact, a short walk down the beach took us there.

The Egyptians’ ancient rubble in Joppa reminded me of why foreign powers all wanted to control Israel. The land of Israel sat in an amazingly strategic position as the only intercontinental land bridge between the superpowers of the ancient world. The strategic International Highway—sometimes called the Great Trunk Road or the Via Maris (“Way of the Sea”)—ran the full length of the land of Israel.

This vast artery of transport stretched from the Fertile Crescent all the way to Egypt. Israel stood at the crossroads of three continents—Asia, Africa, and Europe—and the surrounding seas and desert forced all who traveled to Egypt by land to traverse Israel. In addition to Egypt, the armies of Assyria, Babylon, Media-Persia, Greece, and Rome all invaded Israel in order to control its International Highway. Israel remained for millennia the crossroads for international imperialism, war, and trade.

Even today, Israel serves as the overland passageway for large, high-flying birds that prefer not to migrate over the seas. Literally hundreds of thousands of black and white storks, steppe and spotted eagles, black kites, steppe and honey buzzards, and Levant sparrow hawks soar over the Holy Land in their biannual migrations to and from east Africa. No wonder bird watching remains a popular activity in Israel.

When foreigners traveled through Israel during biblical days, God’s people would either influence them or be swayed by them. Because of this influence, Israel’s central position among the nations proved to be a double-edged sword.

God lamented that Jerusalem’s general placement as “the center of the nations,” had borne no fruit of obedience (Ezekiel 5:5). Ironically, God’s people had been swayed by the very nations He intended them to influence.

What a great reminder that we have to guard the critical points of entry into our lives.

Starting with our hearts.

Categories: Devotional, Sites, Tours
Disclosure of Material Connection: Some of the links in the post above may be “affiliate links.” This means if you click on the link and purchase the item, I will receive an affiliate commission. (Thanks!) I only recommend products or services I use personally and believe will add value to my readers. I am disclosing this in accordance with the Federal Trade Commission’s 16 CFR, Part 255: “Guides Concerning the Use of Endorsements and Testimonials in Advertising.”