In King David’s day, the summit of the Mount of Olives held a place “where God was worshiped” (2 Samuel 15:32). And yet, that same context revealed the rejection of God’s chosen king, David, who crossed the Kidron Valley and ascended the slope weeping as he fled from his rebellious son.

(Photo: The Mount of Olives. Courtesy of the Pictorial Library of Bible Lands)

David’s mournful exit as Jerusalem’s rejected king offers an ominous foreshadowing of the ultimate Son of David’s rejection on those same slopes a thousand years later.

But the history that occurred on Mount of Olives does more than tell the story of rejection. It speaks of redemption and — one day — of the ultimate acceptance of the King.

More than that, it tells our own story.

The Mount of Olives & Jerusalem

Always associated with Jerusalem but never part of the city, the Mount of Olives is located just east and rises 330 feet above the Old City. This watershed of the Hill Country offers beautiful views of Jerusalem to the west as well as of the Wilderness of Judea and the Jordan Valley to the east.

(Photo: The 3 towers on the Mount of Olives identify it from any distance. Courtesy of the Pictorial Library of Bible Lands)

The historian Josephus wrote that Mount Scopus, the northern-most part of the Mount of Olives, often represented “the first sight of the city” (War 5:67-70). The mount takes its name from the Greek skopus, which refers to a “watchman” or a “mark” on which one sets his or her eye. For most pilgrims ascending to Jerusalem from Jericho today, Mount Scopus still represents their first sight of Jerusalem.

Perhaps its high elevation gave rise to the worship of God on the summit prior to Solomon’s construction on the Temple Mount (2 Samuel 15:32).

Regrettably, Solomon also constructed pagan shrines on the Mount of Olives—at the “Hill of Offense”—opposite the City of David at modern Silwan (2 Kings 23:13).

Its view of Jerusalem proved beneficial to enemies. The Tenth Roman Legion camped on the Mount of Olives, opposite the Temple Mount, when they destroyed Jerusalem in AD 70. Titus camped further north with the Twelve and Fifteenth Legions on Mount Scopus.

Jesus on The Mount of Olives — The Place of God’s Coming, Going, and Coming Again

The belief that the Kidron Valley is the future Valley of Jehoshaphat (“The Lord Judges”), where God will judge humanity (Joel 3:2, 12), has inspired thousands of Jews to make their graves on the adjacent slopes. The world’s largest Jewish cemetery spreads across the Mount of Olives, and Muslim graves dot the slopes across the Kidron Valley below the Temple Mount. 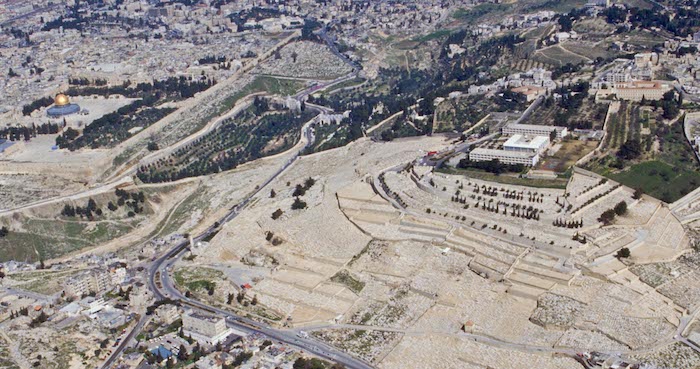 (Photo: Mount of Olives aerial from southeast. Courtesy of the Pictorial Library of Bible Lands)

The Mount of Olives played a significant role during the Passion Week of Jesus, during which, several Messianic prophecies were fulfilled (and were made):

Churches on The Mount of Olives — Where These Events are Commemorated

Many churches dot the slopes of the Mount of Olives, memorializing key events in the ministry of Jesus (and one that wasn’t).

Explore the Mount of Olives in Google Maps. Just point, drag, and click!

Jesus cried twice on the Mount of Olives during His Passion Week:

We too, have each rejected God and walked our own way. But Christ’s gracious surrender to the Father at Gethsemane — leading to Jesus’ crucifixion and resurrection — has made it possible for our redemption.

Perhaps then—as never before—will the Mount of Olives once again be a place “where God [is] worshiped” (2 Samuel 15:32).

See the Bible Come to Life

Want to see the Mount of Olives and other biblical sites for yourself? Sign up for an upcoming tour.

Tell me what you think: Have you seen the Mount of Olives? What did you think? To leave a comment, just click here.